Do you know the scene from the film, Mary Poppins, where they all jump into one of Bert’s chalk drawings on the sidewalks of London?

This is exactly how I felt when I found myself inside one of the photographs from a travel book that has sits on my coffee table.

The family and I have drooled over the pages in this volume ever since we received it two Christmases ago. When I found out that I would be spending a week in Japan for work, my youngest insisted I search out his favorite–the Golden Pavilion; while I had long been intrigued by a red-gated shrine.

To my surprise, both of these treasured locations were in the town that I visited after my work in Japan was finished.

On my second day in Kyoto, I headed out early to make the long journey to the outskirts of the city to find Fushimi Inari Taisha Shrine.

Once off the train, I followed others up a steep hill, past tiny shops, and homes, until I saw a single red gated entrance ahead.

That’s not how it’s supposed to look, I thought; but soon I came to the place that I had seen in my book, and I felt a bubbling up inside.

I began my stroll through the gates, tentatively, giddily, in absolute awe of my surroundings and good fortune; and shortly discovered there were more gates than I ever imagined.

Some travelers quickly turned around and headed back, but I continued, and continued and continued–drawn forward by the embrace of the gates and what lie ahead. 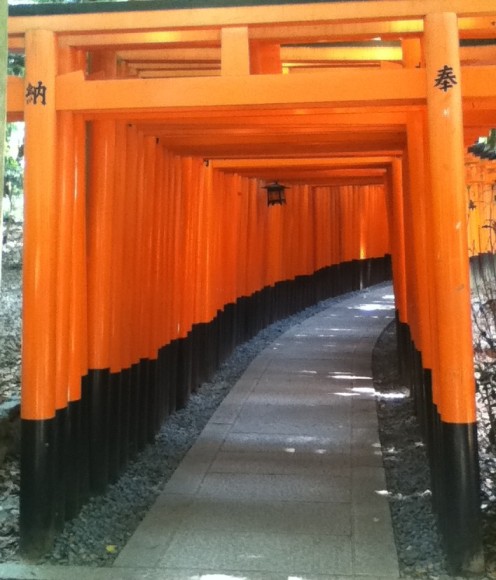 But what I hadn’t seen in my coffee table book was this: these beautiful red gates went on for miles, eventually winding up a steep mountainside.  So I climbed, and climbed, and climbed, certain to reach the top at any moment, but only to find another turn, another set of steep stairs, and another stretch of gates–which were beginning to loose their charm.

One post was being repainted and another repaired. There were buckets of paint, and drop cloths, and tools. These aren’t so special after all, I thought.

But still, I continued. 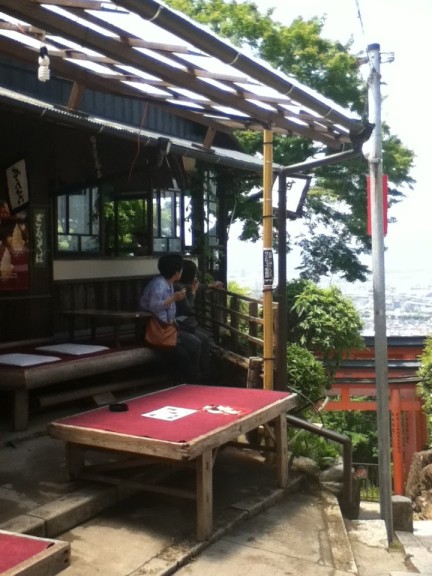 Up and up and up I huffed, cursing myself for skipping breakfast. Suddenly I came to a landing, and to my disbelief, there where two small shops, here in the middle of nowhere.

I dismissed these as overpriced concession stands, until I heard the cry of a baby overhead and realized that these were homes to families who served meals to travelers like me.

Soon after I caught sight of a delivery boy running up and down the steep steps with packages in hand, and later I saw more than one sweat-soaked man carrying propane tanks on their backs.

I continued on, dismissing food, suspecting that the end would come soon, but just like my childhood climb of the Great Sand Dunes in Colorado, the “end” was a constant illusion.

By the time I made the final approach to the last set of stairs which led to a mountain top shrine, I resented Mary Poppins for ever suggesting that I jump into a picture.

I begrudgingly climbed the last bit, dismissed the garden of relics, and dragged myself around the top of the mountain for a unique view of the city; which I quickly deemed unworthy of such a climb.

To salvage the journey, I decided to take another route down the mountain, instead of returning the way I’d come as I had seen others endure.

The backside of the mountain, though very wooded, had its own set of gates which definitely headed down; and I quickly applauded myself for such cleverness.

On the way down, I only passed one other pair of hikers, and they were unlikely tourists; but this was an adventure, and I was eager for the challenge. 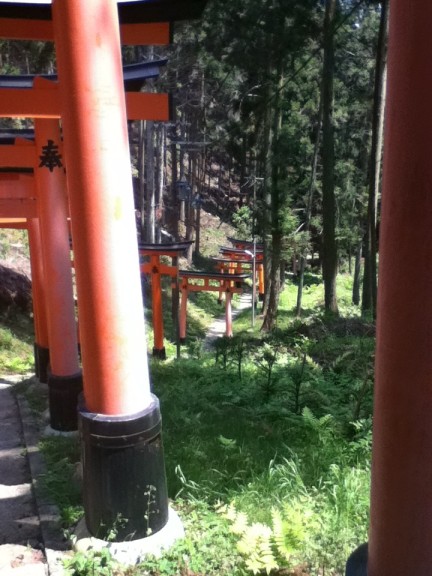 Soon I left the gates behind me, but I needn’t have worried because there was yet another small shop up ahead, beside another shrine; though when I looked inside, it was eerily empty.

After this, the path, turned into just that, a path, and a dirt one at that, which grew narrower and narrower, until I was surrounded by wildness and woods.

This is so cool, I thought; so much better than the gated stairs and all the other tourists.

Maybe I would even see one of those wild monkeys that they took the trouble to translate about.

Should I look for them?

Is that what I was hearing in the trees?

Should I be worried?

Should I really be hiking down this mountain alone?

Just as winded my way down steep hill and considered turning around, a long golden brown serpent slithered in front of my feet and I yelped; turned on my sandals, and ran–all the way up the path, past the empty shop, up the steep stairs and the winding gates on the back side of the shrine, past the sweaty men hoisting propane tanks, and back to the top; and down the gated path I had come.

My shortcut cost me another hour of hiking, particularly as I took a few wrong turns along my pioneering way.

I sat down at the first restaurant for ice cream cone, forgoing breakfast.  I made myself sit until the cone was almost finished, (as the Japanese are rarely seen walking with food), and then I began the trek down the mountain; which surprisingly was much harder on my trembling legs than climbing had been.

Toward the bottom, I met up with some traveling friends from New Zealand; who I had met earlier in the week at the market.  They asked how far it was to the top and whether it was worth it, and I don’t remember exactly how I replied; except that I felt triumphant and satisfied, and this may have encouraged them to go on. 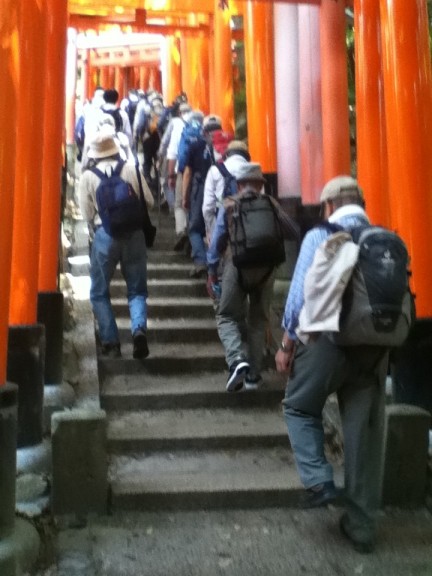 Along the way up and down this journey, I had made other friends too, or at least said, Konnichiwa or Ohayou Gozaimasu, or simply smiled at:

Small groups of young men in sports uniforms running the gates for training.

A middle-aged man in a head band, stretching, with whom I shared the mountaintop view of the city.

A well prepared group of businessmen–on vacation–who passed me with sturdy packs on their backs and hiking boots on their feet.

A retired couple from England with whom I shared a bench beside a pond. (They had seen more of my country than I had.)

Couples. Holding hands. Giggling. With young women hiking the steps in shockingly spiked heels–without complaint. (Maybe they hadn’t known about the climb either.)

From time to time, the gates would grow hushed, and I’d come upon lone photographers, pausing in the stillness, waiting to capture the magic of this stunning creation–into which we had miraculously fallen.